Since my last post was all about the frijoles, why not make this one all about the meat! Carne Asada is what we’ll be cooking up this week, and it’s yet again another piece of gold pulled from the treasure chest of my days slanging tortillas for the Tamayo Family.

One could make a pretty good guess that since I worked for a Mexican-owned company that made a Mexican staple food product when it came time to shut the tortillas press down and come together for a celebration, there would be some Mexican food and a lot of it.

During my upbringing at La Tortilla Factory, I made friends with one of the shift supervisors; her name was Rebecca. She was the resident caterer for the factory, and damn, could she get down! We had over 100 employees to feed at a typical event, but that was no problem for Rebecca, who was all but maybe 5’2″. The day before a party, she would get one of those large plastic storage bins and fill that sucker up with carne asada swimming in a bath of all kinds of goodness to marinate overnight.

The next day I’d be at the grill pulling an endless stream of carne asada out of its bath and onto the grill—the aroma-filled smoke from the grill watering my mouth and eyes at the same time. I’d keep my head down and continue cooking until all are fed, and the only thing left swimming in the marinade are slices of citrus, onion, and jalapeños.

You can play around with this recipe as you wish, even the one shown below is not exactly what Rebecca taught me, but it’s got the major parts covered. If you can’t find thinly cut carne asada at your local market, you can use a skirt steak just as well. Grab some tortillas or make your own, grill up some carne asada and get down Mexican style. Let’s cook 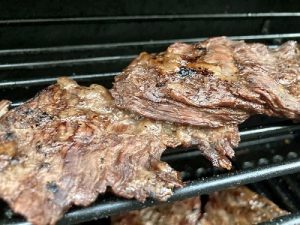 Method (The day before cooking)