Everyone loves the mystery of a good magic trick. It’s so exciting to watch the seemingly impossible become possible right in front of our eyes. Sure, we all know there’s some behind the back, slight of hand something or rather going on but who cares it feels real.

This week’s recipe was something of a magic trick revealed to me a long time ago by my old boss Willy. Unlike the spoiler “magic revealed” shows, I felt not spoiled, but totally blessed by this piece of gold Willy gave me at one of our company picnics.

I’ve always been amazed by the velvety smooth burst in your mouth pinto beans you get at your favorite taqueria. So when I asked Willy what he puts in his beans to make them taste so good, he leaned in like he was giving me a hot tip on a horse race and said… nothing. Nothing! I said, yup he replied just water and salt at the end. He said if you salt the water in the beginning the skins get tough and we don’t want that. Damn, I felt like I was back stage watching everything the magician was doing behind the scenes. I couldn’t wait to get home and try it.

And this is it folks, nothing but water and salt at the end. You’re gonna love how easy this is! Let’s cook 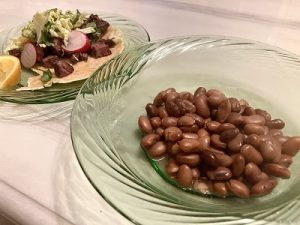