There are many ways to breakfast (break-a-fast) in the morning. For some, it’s nothing more than a cup of joe, and for others, it’s a more elaborate affair. No matter how we choose to start our day, it becomes ritual and makes the morning a pleasurable event. This week’s recipe has become ritual in our household and is something my girls look forward to every Tuesday

There’s a small restaurant chain here in the bay area called Nations Giant Burger. It’s a pretty good greasy spoon that serves breakfast 24 hrs a day. They’ve got something called a “Three egger.” It’s three eggs any style, three slices of bacon or sausage, three pieces of toast, and hash browns. And if that wasn’t enough, you can swap the hash browns and toast for three monster pancakes. If any of you would have known me back in my 20’s you could guess what I was going for every time I dropped foot into a Nations after a long night of running the streets… yup, Three egger with pancakes. After that affair, you aren’t eating again till dinner.

This post, however, is not a homage to flapjacks, although they do deserve it. This post is about what the pancakes were replacing—the hash browns. I’ve never been a big fan of potato hash browns, so I rarely cooked them at home. That was until I discovered that the spud isn’t the only thing that can be shredded and griddled to perfection.

Yuca can be found in most Hispanic or Asian markets. It has a dark woody skin that protects a dense white flesh. You’ve seen me use it in other recipes found here. If you like your hash browns crispy on the outside and chewy on the inside, you will love this. Let’s cook 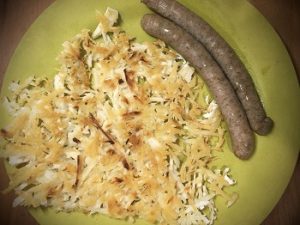 I am giving this a try! I do love potato hash browns but am looking for lower glycemic index foods. – I’ll let you know how it goes 🙂

Great! You can also try green plantain bananas. They have an even lower glycemic load.